Manila was hit by the Ramen bug a few months ago. An entire city that claims the proud chicken mami and the unparalleled batchoy as part of its culinary legacy is lining up at new swanky ramen places, slurping soup as if they’ve never tasted meaty broth before. Now half the people I know are pseudo experts in the taste of the perfect tonkotsu (pork bone broth).

I still don’t quite understand it all.  Lucky Me! Instant Batchoy is good enough for me on most days.

So T and I found ourselves at Ramen Yushoken one fine day last summer on the recommendation of one of our soup slurping friends. This place is supposed to be one of the best Ramen joints in the South of Manila and its recipes are descended from Japan Ramen champions. You can check out their Facebook page here for more history.

A ramen and ramen-eating primer from the restaurant is shown below.  Note the strict instructions on how to eat the ramen, the lack of western utensils and lack of takeout.  I also saw a sign in the restaurant somewhere that says you shouldn’t dawdle when taking Instagram food pics lest the noodles deteriorate while you are posting your update. Ramen snobbery all around 🙂 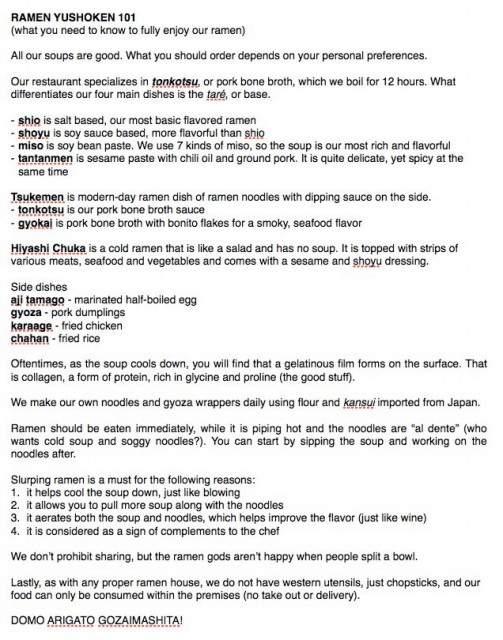 The service was fast, and the broth did justice to the restaurant’s reputation. I ordered the Shio Tonkotsu Ramen below. The broth is just salt based, and nothing distracted from the rich umami of the soup.  Highly recommend not to jack up the broth taste with the chili on the table. Textural contrasts include a piece of fermented bamboo shoot, sesame seeds, green onions, sliced mushrooms, and a small piece of pork belly (a little overcooked). The noodles themselves were too al dente for me; I practically exerted bit of an effort to chew, though I know the kitchen intended it this way since the hardy noodles should not soften too much in the ramen broth. 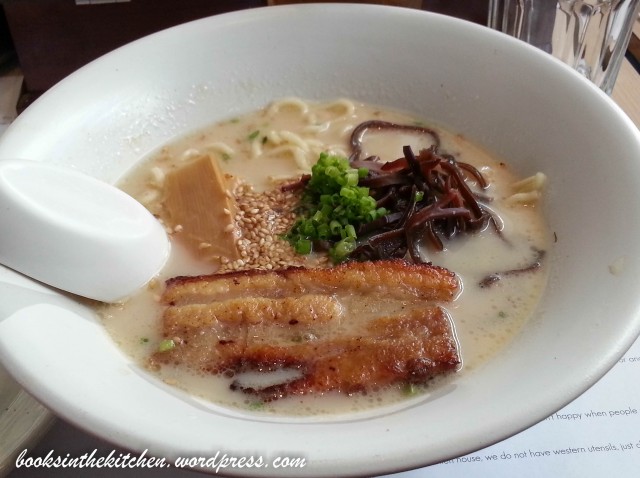 T ordered the Miso Tonkotsu Ramen, which had a fatter, richer broth due to the fermented soybean paste dissolved in the ramen. This version can withstand a dollop of the table side chili paste to give it a kick (and cut through the fatty taste). While the two servings were about the same quantity, the Miso version was too much for one person because it had a heavier umami flavor.

A bowl should be sufficient to fill a hungry tummy, but if one needs a side dish, order the Aji Tamago. These seasoned, soft boiled eggs had the consistency of custard and a sweet taste to the egg yolks that I could not place (honey?). Egg  perfection. One should scope a little bit of egg with soup spoon, fill the spoon with broth, then swallow. 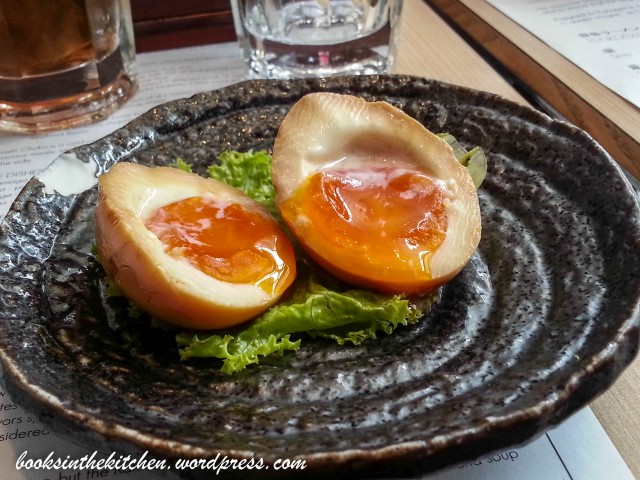 Ramen Yushoken is quite small and is almost always full. Unfortunately the place does not accept reservations so its best to come early (11am). Dropping by late at night will run the risk of running out of broth (the kitchen only makes a finite amount everyday, and once that is out, no more ramen). Service is quite fast but the place has the atmosphere of Chinese restaurants i.e. not the right place to linger and have lengthy conversations about life. This is a place to seriously slurp soup. Or in my case, I would come back just for the eggs.